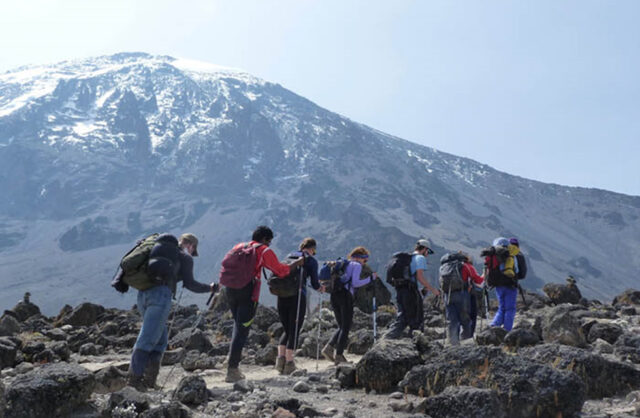 In the first article I posted on the nomadic traveler I talked briefly about how much my first trip changed me. The week I spent climbing Kilimanjaro brought out a lot of emotions in me and challenged me to the core. Many people dream about challenging the mountain and reaching the highest point of Africa. If you’re thinking about going I would urge you to do it. If you’ve already booked it and are wondering what to expect here’s my experience. Before you go any further you should know that reaching the peak is a challenge. You might feel your body telling you to turn back but if it was easy it wouldn’t be worth doing.

At the bottom are a couple of tips from my experience.

On the first day I landed at Kilimanjaro international where I caught a ride to Marangu. The Company I booked the trip through arranged this for me as I didn’t want to have to deal with negotiating for a taxi or trying to communicate where I was staying. When I arrived at the hotel most of the group I would be climbing with was already there and I was by far the youngest in the group. We all introduced ourselves and discussed our expectations and our fears. From the time I boarded the flight I had a pit in my stomach. Now hearing about their training regimen and the gear they had packed the fear really set in as I realized I was probably not prepared. After a couple Kilimanjaro beers I went to lay awake in bed, unable to sleep from excitement… or maybe the nervousness of the upcoming trek.

After breakfast we jumped in the vehicle and drove to the start of the Rongai route. This route is said to be the easiest as it has the most gradual ascent. At the base of Kilimanjaro the terrain is lush jungle. We observed colobus monkeys picking flea off of each other and digging for potatoes that a local had planted. The thick air affected my lungs and I could hardly breathe. I didn’t realize it at the time but for me the first day would be the hardest day to breathe. It was crippling and I didn’t hide it well as the other members of my group asked if I was okay. Determined not to quit on the first day I fought through the lack of oxygen trailing at the back of the group. I remember stopping to photograph plants, which seemed alien to me.

Toward the end of the days trek there appeared a clearing in the trees and I got to see the days progress. The view was beautiful so I stopped and snapped another picture, a frequent occurrence on the mountain.  The first day it took us approximately 4 hours to reach our first campsite and when we finally made it to our campsite for the night, Rongai one camp, I was relieved to be done climbing for the day. Once we were settled the guide gathered us all together to continue on the path. My heart sunk, I had forgotten about the acclimatization climbs which consists of climbing higher to get your body used to the altitude for the next day. Then we turned around and went back to camp. After dinner I went straight to my tent and fell asleep. Despite sleeping on a thin mat on the hard mountain terrain I slept like a baby. (Our elevation was 8,500 ft above sea level)

On the mountain there is no bathroom or shower and in the mornings and at night we use a bowl of water and a bar of soap to try and clean ourselves. Already, I could smell myself. After breakfast we hit the trails again and I was relieved that breathing was easier today. The higher we went the less dense the bush became and the air became less humid. We had lunch at second cave before continuing onto our campsite. I turned off my brain and focused on putting one foot in front of the other. At times the path was narrow, steep and/or uneven. Our guides were in good spirits doing this several times per year and frequently broke out into song. I can’t remember the words but it was a catchy tune to walk to. After 7 hours trekking and at an altitude of 11,800 ft we arrived at the campsite. It was located in a sheltered valley. It had been a long day of trekking and there was no acclimatization climb. We ate dinner together and swapped stories becoming less a group of strangers.

The meals always included a selection of fruits and a lot of carbs. Porridge, eggs ,bacon and toast in the mornings. Lunch typically consisted of soup, bread or pancakes, cheese, tuna and jam. Dinner always consisted of three courses: soup and bread, followed by a main dish with fruit for desert. Again we began slowly climbing towards the peak. The guide warned us that the day would involve a steep climb but we’d get to the campsite in four hours. Lack of oxygen due to the altitude started becoming apparent and things as simple as standing up required more effort. It felt almost like I was out of breath and couldn’t catch it. The group was a lot quieter today because nobody had the energy to talk. We arrived at the campsite for lunch which was followed by an acclimatization climb. It’s supposed to help your body get ready for the next days climb and I’m sure it does but it’s painful turning around and going back down. We were in the clouds at this point and unable to see the view. We camped at 14,200 feet

The view for breakfast was astounding. Even to this day I don’t think I’ve eaten with a better view. Today we went across the “lunar desert” which is appropriately named. It seemed like we were walking across the surface of the moon. The landscape was barren and we could see to the other side where our campsite was. It never seemed to get any closer through the day. The only thing that stuck out was the fuselage of an airplane sitting on the ground and the guide told us that it had crashed years before. As we walked there was more of the wreck including the wings. An eerie site to see when climbing Kilimanjaro. When we arrived at base camp we didn’t have time to socialize as we would be beginning the summit attempt at midnight. This allowed us to see sunrise from the peak but would be the hardest part of the entire ordeal. We camped at 15,400 feet

At midnight my guide shook me awake and I struggled to get ready. Still half asleep, but excited, I had a cup of tea, put on my toque and began following my guide. I had a flashlight on my head but it was pitch black and I could only see the path directly in front of me. It was steep and the higher we got the thinner the air became. Eventually every step took all of my effort and I had to stop frequently to catch my breath. The guide seemed un-phased by it and was his jolly self. At one point he was singing and smiling as a dragged my feet following him. It seemed vertical and didn’t it stop climbing until we reached Gilman’s point at 18,652 feet.

I had no idea what time it was but it was still dark and I’d climbed over 3,000 feet already. The guide told me that I only had less than 1,000 feet to the peak. It seemed so close but that was just the vertical height and in reality it was still some distance away. The altitude began getting to me and I sat down thinking I was going to puke. It passed and I fought on. Finally the sun was beginning to peak over the horizon which gave me an excuse to stop and take a picture. Finally I made it to the summit. I’d been climbing Kilimanjaro for 5 days, and it was all to reach that spot. I took some pictures, caught my breath and turned around to go down.

At Gilman’s point on the return trip I was able to see what I had climbed and was glad I’d done it at night. If I had been able to see what I was climbing it might have disheartened me. At base camp I had an afternoon nap before we continued down the Machame route. The next morning, for the first time, my legs were sore. Going down may be easier but it’s much harder on the muscles. We flew down the hill and reached the bottom that day. We celebrated the victory at the hotel. The next day I couldn’t walk because my legs had never been so sore. During the 5 day safari that followed I wasn’t walking normally until the last day.

My tips on climbing Kilimanjaro

There’s not much I can tell you that you can’t hear from the company taking you up the mountain, but the biggest things for me were