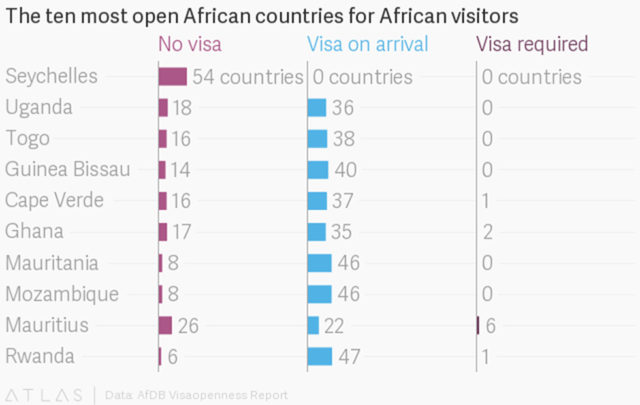 After I wrote an article early last year on the struggles of travelling in Africa on an African passport, I was overwhelmed by the reactions from other Africans who could relate to my experiences.

At the time I was in the process of planning a four-country Francophone West Africa road trip and only sheer wanderlust and love of my continent kept me pushing along to get the visas. Just around that same time, the African Development Bank (AFBD) released its inaugural Africa visa openness report that confirmed it was easier for North Americans and Europeans to travel in Africa than it was for Africans. I was not surprised.

Other good news is that what the naysayers said would happen with increased intra-African travel (increased crime, terrorism, in flux.) has not come to pass. Seychelles—which is classified as a high-income country—has no visa requirements for any Africans and this has been in place for years.

Rwanda, another forerunner in visa openness, offering visa on arrival for almost all African countries, saw a 22% annual growth in African tourists from 2015-2016, but only considered 0.045% of all visitors as suspicious individuals. In 2015, a quarter of all tourists visiting Mauritius were African. Africans are travelling in Africa despite the challenges.

The recent creation of a platform by the African Development Bank that Africans can use to check visa requirements by citizenship is a major asset in increasing access to information. While the site doesn’t yet provide information on visa processes, it will help you know at a glance if you need a visa for a certain country and if you can get it on arrival or need to apply beforehand.

The online platform might not be something you’re able to show an immigration official when you land in their country without a visa, but at the bare minimum, it will give you clarity if you get conflicting information on visa requirements. The 2018 visa openness index report promises to report not just on openness, but also on procedures. I believe it will be eye-opening to see just how hard it can be sometimes to obtain a visa to another African country.

I have African friends who are seasoned travellers who declare,

“Do not even bother trying to go to Angola—it is impossible to get a visa.”

They have jumped through all the hoops, obtained all the documentation, visited the embassy 10 to 15 times and finally realized that they will never get into that country on their African passport. The index does confirm that 52 of the 54 African countries need to apply for a visa beforehand to get to Angola, and anecdotal information leads me to believe that it is next to impossible to get one.

Having spent the better part of the past year in Senegal, I have Kenyan friends who call me to confirm if Kenyans need a visa to visit Senegal. I assure them that a visa is no longer required, but when they call the local embassy they are told that a visa is indeed required and could take up to a month to obtain. It’s unclear how they’re can be such an information mismatch between immigration offices representing the same country.

Challenges still abound. Even as visa restrictions are reducing on the continent, there is much to be said about the actual process when one needs a visa. I have a South African friend who recently embarked on a 22-country, 7-month Africa tour. From her Facebook newsfeed, I see that it took the better part of a year to obtain her visas and lots of blood, sweat and tears. Reading her feed, I could sense her frustration at embassies that wanted to know why a single, black, African woman wanted to travel around her own continent, how she could afford it, what nefarious activities she had planned for when she got into their country. This is the usual idiocy one deals with when trying to get a visa anywhere, but when one gets such treatment within your own continent, it hits hard.

Reading her feed, I could sense her frustration at embassies that wanted to know why a single, black, African woman wanted to travel around her own continent, how she could afford it, what nefarious activities she had planned for when she got into their country. This is the usual idiocy one deals with when trying to get a visa anywhere, but when one gets such treatment within your own continent, it hits hard.

Talk of the much-awaited African passport in 2020 offers some hope, though there are still questions about how this will work in practical terms.Information is still extremely difficult to come by. There is a mismatch between policy, government announcements and implementation. In the past year a few African countries have announced their intentions to waive the need for visas before travelling, but sometimes it is unclear on when such decrees are implemented.

All in all, it is an interesting time to be living in, as an African wanting to travel around our continent. Perhaps the next generation will never know that there was a time we couldn’t travel on our own continent.

Guide to Gorilla Trekking in Africa