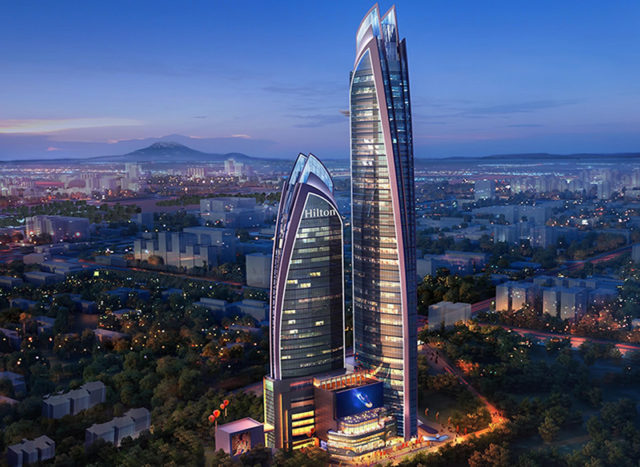 Kenya the country with the second-highest mountain in Africa has started construction of the continent’s tallest building in Nairobi. President Uhuru Kenyatta laid the foundation of the Pinnacle Towers which is set to be a monumental 900 feet tall. The tower will surpass Carlton Centre, in Johannesburg, South Africa which is currently the tallest building in Africa at 732 feet.

Kenya the country with the second-highest mountain in Africa has started constructing the continent’s tallest building in Nairobi. The building is worth $200 million. The funding of the tower is being sponsored through equity and debit.

President Uhuru Kenyatta laid the foundation for the tower on Tuesday in Nairobi. The tower, which is in Nairobi’s Upper Hill is being developed by Hass Petroleum and White Lotus. Commenting on the deal, the president said “your choice to invest in Kenya is, indeed, a clear vote of confidence in the policy reforms we have been implementing in the recent past to make Kenya attractive and competitive and to reposition our tourism sector.”

The Pinnacle Towers is set to be 900 feet and will have the highest viewing deck in Africa. Te building will have a helipad, five floors of shopping, entertainment, and restaurants, a health spa, gym and an infinity pool.

So far over $13.5 million has been spent on the preparatory stage and construction of the foundation.

Dubai’s Burj Khalifa is the tallest building in the world standing at 2,717 feet followed by the 2,073 feet Shanghai Tower in China.

I also laid the foundation stone for the Pinnacle Tower, a 70 storey building which will be the tallest tower in Africa. pic.twitter.com/IxsxuKMVMi

The tourism sector in Kenya has been affected by terrorist attacks. In 1998 the American Embassy was attacked and a hotel in Mombasa full of Israeli tourists was also attacked. In 2013, the Westgate shopping mall shooting was the latest terrorist attack by Islamic fundamentalist group Al Shabaab. The tourism sector in Kenya is the second largest source of foreign exchange for the country.

President Kenyatta opened two international hotels on the same day he laid the foundation stone for the tallest building in Africa. Hopefully the tourism sector in Kenya will experience a rebound. With 69 days to elections, President Kenyatta has been trying to secure votes amidst accusations of his government being corrupt.